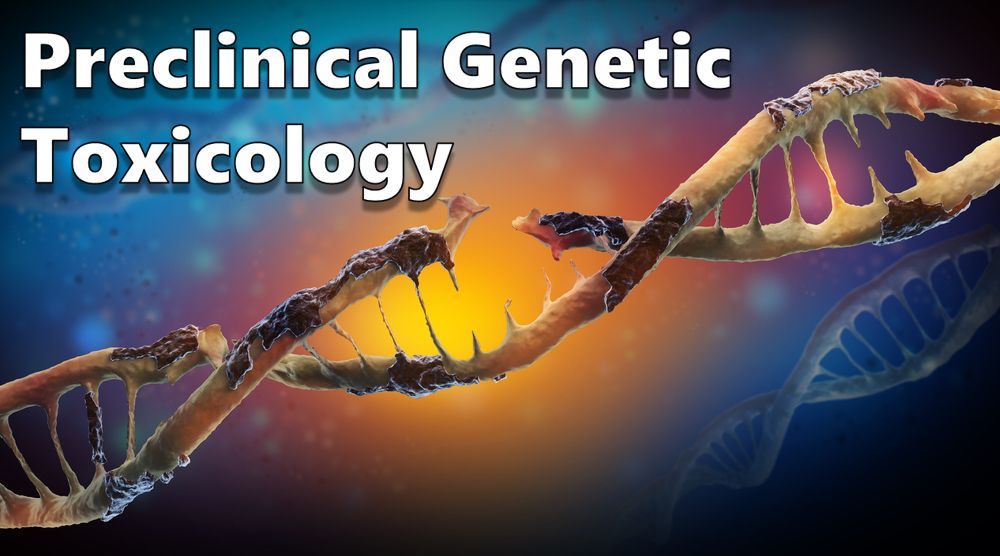 Regulatory approval for new drugs requires proof of safety for human consumption. To prove a drug is safe, it must be demonstrated to be safely absorbed, distributed, metabolized and excreted from the body without damaging organ systems, triggering dangerous immune responses or causing negative long-term health effects.

Genetic toxicology is one of the many fields of preclinical safety testing in which damages to genes and chromosomes by drugs and chemicals are evaluated. Today, drug development requires genetic toxicology testing to serve as an estimation of potential carcinogenicity.

The history of genetic tox started in the 1930s in the Soviet Union. By the 1960s, a critical mass of data had been accumulated and by 1969 the Environmental Mutagenesis & Genomics Society was founded in the United States. This eventually developed into interdisciplinary research in occupational health, toxicology, genetics and biochemistry of foreign compounds. Over the early 1970s, the European Environmental Mutagen Society was formed, as well as other mutagen societies in other countries.

At this time, over 100 methods to assess genetic activity of chemical compounds have been developed, but the majority were discarded and around 20 assays remain in use. Like with other toxicology tests, direct testing in humans is not possible, instead, microorganisms, animal models, plants and in vitro mammal & humans cells serve as substitutes. The gold standard for testing was laboratory rats & mice due to their phylogenetic relationship to humans. However the time and costs associated with rodent testing presented problems with the sheer amount of chemicals that required testing. Thus the current trend is to validate genetic tox assays using bacteria and human cells (cultured, fresh lymphocytes and 3D tissue models).

Mutation is the alteration of a DNA sequence resulting from exposure to mutagens, carcinogens, radiation or from errors during DNA replication. These errors can cause problems with protein synthesis, creating non-functional or partially functional proteins. Mutations can result in cell death, or they can result in permanent alteration of the genetic code, resulting in future germ cells carrying the same mutations. Depending on the affected proteins, serious medical conditions can manifest.

Clastogenicity is a form of mutation that is characterized by disruption or breakage of chromosomes. Single or double strand breakage can lead to cross linking, rearrangement, deletion or additions to chromosomes. Clastogen exposure increases frequency of developmental abnormalities in fetuses as a result of abnormal germ cells and may lead to carcinogenicity.

Aneuploidy is characterized by an abnormal number of chromosomes in a cell that occurs as the result of errors during cell division. The standard 46 chromosomes in humans can become 45 or 47, manifesting as birth defects such as Klinefelter syndrome, Down syndrome and Edwards syndrome.

The Ames bacterial reverse mutation assay (Fig.1) tests for mutagenicity by exposing genetically modified bacteria to potentially mutagenic compounds. The bacteria used are artificially mutated and are incapable of reproducing in the absence of histidine (Salmonella) and tryptophan (E. coli WP2 uvrA). When exposed to mutagens, the bacteria will regain the capacity to reproduce on agar media in the absence of those amino acids. When the compound of interest is toxic to bacteria, such as with antibiotics, a Pig-A assay can be used to test for mutant erythrocytes in mammals. Requiring low blood volumes and assessed using flow cytometry, Pig-A assays are quick and effective.

The Chromosomal Aberration Assay test (Fig.2) is designed to evaluate the potential of a test compound to induce structural chromosomal abnormalities such as breaks and exchanges.

The micronucleus assay (Fig.3) measures the presence of micronuclei. Micronuclei appear when there are errors during cell division. Instead of a cell dividing evenly into two identical cells, one cell will lack a whole chromosome or have a partial chromosome. The missing chromosome(s) will form their own micronucleus within the cytoplasm, resulting in one large nucleus and one small nucleus. Micronucleus tests are performed with bone marrow or peripheral blood cells.

The comet assay (Fig.4) is a gel electrophoresis method used to visualize and measure DNA strand breaks induced by mutagens in individual cells using microscopy. The breakage is measured through use of an electrophoresis system to pull fractured DNA away from the nucleus of the cell. DNA holds a negative charge and fractured DNA is pulled to the positively charged anode, leaving a comet tail like appearance when stained fluorescently.

We can perform a variety of in vivo and in vitro assays to test for genotoxicity including: Bacterial reverse mutation assay, in vitro micronucleus test, Chromosomal aberration assay, in vivo micronucleus & comet assays. We can also perform the Pig-a- gene mutation assay and screening assays. Screening assays are cost-effective alternatives for assessing genotoxicity and carcinogenic potential of products during the Research & Development phase.

We offer flexible packages with mixes of in vivo and in vitro assays to suit regulatory testing requirements for IND submissions.

The International Conference on Harmonization of Technical Requirements for Registration of Pharmaceuticals for Human Use (ICH), has approved new Guidelines S2 (R1) on Genotoxicity Testing and Data Interpretation for pharmaceuticals Intended for Human Use. According to these ICH S2 (R1) revised guidelines, the standard genetic toxicology battery consists of the following genotoxicity assays which are offered at ITR.

Genetic toxicology screening is required by all regulatory bodies responsible for safety testing of chemicals and pharmaceuticals. With over 100 genetic toxicology studies successfully completed, ITR is well equipped to perform a variety of in vivo & in vitro tests for chromosomal damage and gene mutations.

ITR is steadily increasing its expertise and laboratory services to provide a one-stop-shop experience to help our clients get their compounds smoothly and quickly to the clinic.